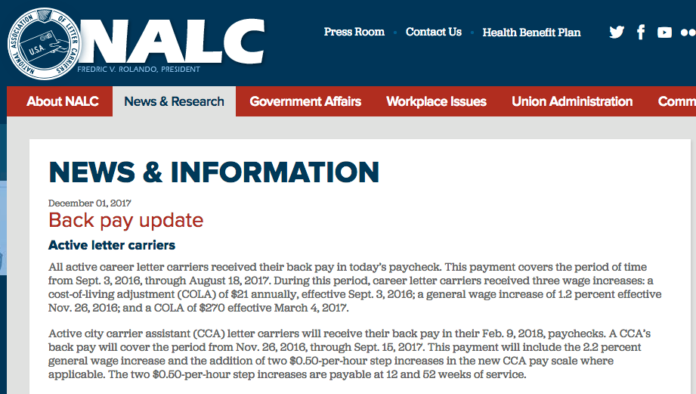 All active career letter carriers received their back pay in today’s paycheck. This payment covers the period of time from Sept. 3, 2016, through August 18, 2017. During this period, career letter carriers received three wage increases: a cost-of-living adjustment (COLA) of $21 annually, effective Sept. 3, 2016; a general wage increase of 1.2 percent effective Nov. 26, 2016; and a COLA of $270 effective March 4, 2017.

Active city carrier assistant (CCA) letter carriers will receive their back pay in their Feb. 9, 2018, paychecks. A CCA’s back pay will cover the period from Nov. 26, 2016, through Sept. 15, 2017. This payment will include the 2.2 percent general wage increase and the addition of two $0.50-per-hour step increases in the new CCA pay scale where applicable. The two $0.50-per-hour step increases are payable at 12 and 52 weeks of service.

Letter carriers who converted from CCA to career during the back pay period received the career portion of their back pay today and will receive the back pay for their time spent as a CCA in their Feb. 9, 2018, paycheck.

The remaining 3,600 carriers in this category will receive their back pay the same way on Dec. 15, 2018. This unfortunate delay is due to a coding error related to the terminal leave payments made to these carriers.

Former CCA letter carriers who were active on August 7, 2017, and have since separated from the Postal Service should check back for further updates on when and how their back pay will be distributed.

PostalMag.com comment: Feedback indicates many letter carriers were expecting a larger amount. It appears the back pay was taxed at the 38% tax rate. 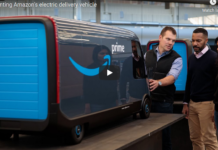 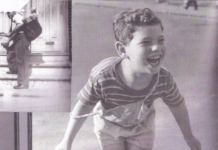 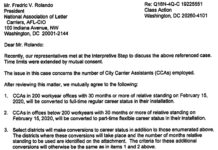