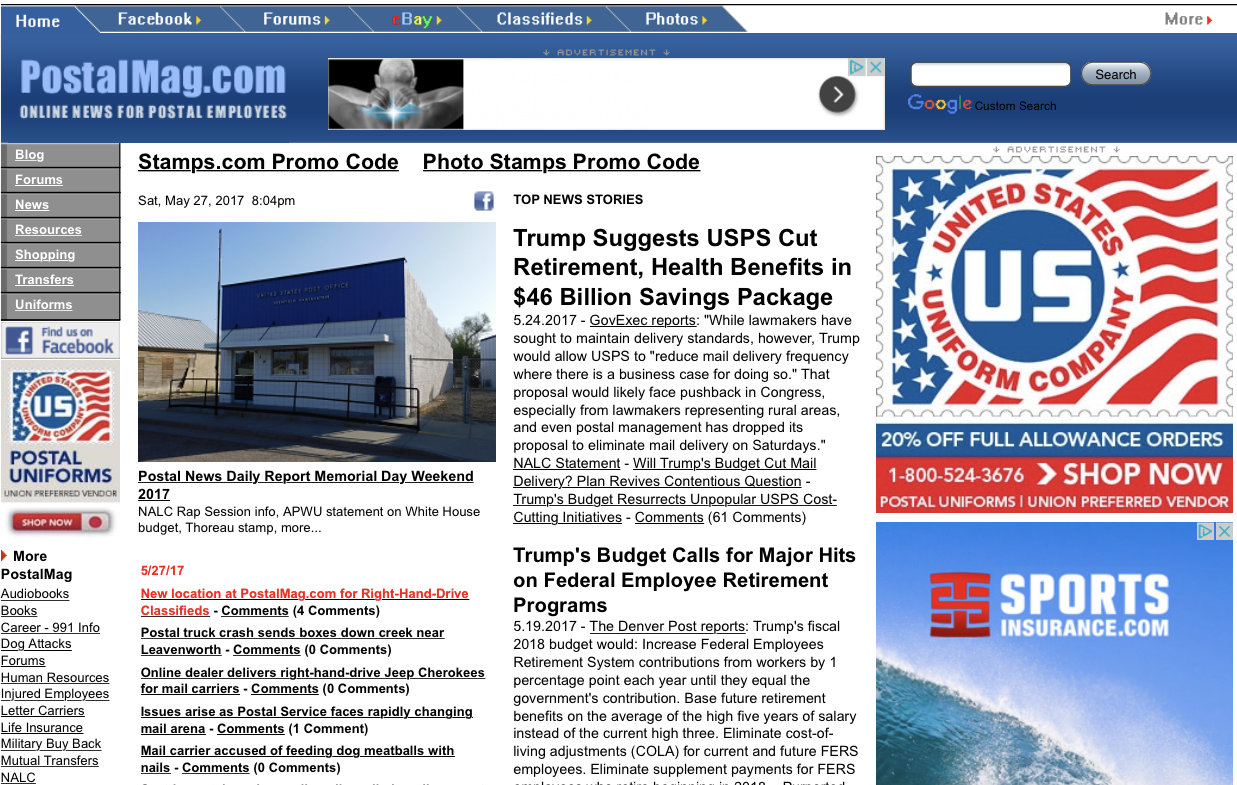 “Mr. Wakefield,
I would like to personally thank you for all of your (what must be) hard work in giving the world PostalMag.com. It is in my humble opinion one of the best sites on the World Wide Web (which is why I have it as my Start Page)!

I was totally flabbergasted to discover that you are a regular rank and file postal employee. With the quality of this site I would have sworn it was run by a top Web design service. I wish the best for your venture.”
– Sincerely, Rural Houston

“I am a mid-level manager with the Post Office. Recently, I attended a meeting conducted by our District Manager. There were about 50 managers in attendance. The topic was USPS transformation and the District Manager conducted the meeting by periodically asking the audience questions about the Postal Service’s current situation. Few of the other managers knew the answers to any of his questions. I found myself reluctantly answering all of the questions correctly. I knew the answers because I read PostalMag.com on a daily basis. Your site makes for much more informed and involved postal employees. Thanks.”
– J.H.

“What an invaluable resource you have created here. Good job.”
– Steward670@…

“I do LOVE your site. It has so much information and I recommend it to all my “associates” – Postmasters (I’m one), clerks, carriers. There is a lot to learn there (at PostalMag.com).”
– S. Fox

“Your site is by far the best postal site on the Internet.” – Frank

“Wow! You have about everything under the sun on your site concerning Postal People. Great Job!” – Pete G.

“I was just going through your website and wanted to tell you that you have a first-class site – extremely professional and very informing. Keep up the good work!” – Pete

“Commissioner _____ at the Postal Rate Commission… I check postal news sources on a daily basis… and visit your site frequently. I have read with interest the article and comments on Saturday delivery.”
– Unnamed Commissioner

A: No, we do not have a news feed. And yes, there are a few sites that cut and paste our content. Imitation is the best form of flattery.

Q: I really appreciate the information provided at PostalMag.com. Can I donate to help out?

A: Although we appreciate your offer, our sponsors currently cover most all costs associated with the Web site.

Site For Postal Employees Flourishes on the Net
For Immediate Distribution

PostalMag.com owner Tom Wakefield has heard the joke more than once when he tells someone he runs a Web site for postal employees: “You sell guns on the Internet?” PostalMag.com however is no joke. The site has become one of the most popular destinations on the Internet for postal employees, registering millions of hits per month from tens of thousands of visitors. There are no guns to be found at the site. What visitors do find however is an interesting mix of the postal culture, from the latest postal news, to postal eBay auctions, dog attack stories, editorials, benefits info and other items of postal interest.

Wakefield, a letter carrier in Dallas, Texas, got the idea for the site in 2000 when he went online searching for information about postal benefits for a fellow employee. He was expecting to find a category site for postal employees, much like Military.com’s site for service members. What he found, however, were a few personal sites that were infrequently updated.

Wakefield posted the information but received few visitors initially. He soon learned a few elementary facts about the Internet. “First, you have to find a way to be found. So I registered with search engines and traded links with other postal sites,” Wakefield says. “Second, I found that Internet surfers have a voracious appetite for information, and they frequent sites that are frequently updated and discard sites that aren’t. When I began updating my site daily with postal news found throughout the Internet, the hits started coming,” Wakefield adds.

Another lesson that Wakefield learned is that, though information is power, a professional Web site design equals credibility on the Net. He believes that the design aspect of the site is important. “On the Net, all that people see is what is on their monitor. A professional design levels the playing field with the big guys,” notes Wakefield. In PostalMag.com’s case, the design betrays that the fact that the site is a one person operation. Wakefield both laughs and is humbled when postal employees ask him such questions as “how many employees work for PostalMag.com” and when job seekers apply for such positions as the Chief Technology Officer.

One of the most popular features at PostalMag.com has been their discussion boards, which allows postal employees from all across the nation to voice their opinions, vent their frustrations and share information using anonymous postings. The forums have hundreds of thousands of page views and tens of thousands of messages. Though some of the messages are your stereotypical gripe sessions, many other messages are from postal employees seeking and giving postal-related advice and information.

Sites such as PostalMag.com have revolutionized the way postal workers communicate with each other. Before the Internet, many postal employees received only sporadic information from the Postal Service, most of it pertaining only to their particular tasks at hand. Today, postal news stories are culled from online news sources from around the world and posted for all to see. As a result, local postal stories are also becoming national stories. For example, the story about a Missouri letter carrier killed while delivering mail in the dark became a national story that was discussed on workroom floors across the country the next morning. The incident, and publicity from the incident led to a national outcry among letter carriers and has led to some reforms concerning delivery after dark. The local paper that initially ran the story was surprised at the volume of e-mails received from postal employees around the nation.

One of the most important stories PostalMag.com has followed is the anthrax through the mail terror attacks. Many postal employees have contacted PostalMag.com saying they received more information about anthrax and the attacks from the site than any other source.

Though Wakefield is a postal employee, the site is not affiliated with or endorsed by the U.S. Postal Service. Wakefield says that he is very careful with the ethics part of the situation. “I don’t use inside information and most all of the content at PostalMag.com can be found somewhere on the Net. And though I developed the site primarily for employees of the U.S. Postal Service, the site is generic, in that, it is a postal site, not a United States Postal Service site.” In fact, Web statistics show more than a few visitors from from such diverse places as Great Britain, Saudi Arabia, Germany, and Australia.

What do top officials at USPS headquarters think about PostalMag.com? Wakefield is quick to point out that they are probably a bit under whelmed. “Their site, usps.com, is one of the most frequented and most important sites on the Internet.” Nevertheless, Wakefield knows from his Web statistics and from e-mails that top postal and postal union officials regularly visit the site.

Wakefield believes that an informed employee is a better employee. He likes to tell the story of a manager at a district manager’s meeting who knew all of the answers in a question and answer session about postal reform – because he was a frequent reader of PostalMag.com.

“PostalMag.com’s goal is to give postal workers the news, information and resources they need to help make their careers with the postal service as rewarding and enriching as possible,” Wakefield says.

The biggest lesson Wakefield has learned at PostalMag.com over the last several years is that there is a vast amount of untapped human potential among the 700,000 plus employees of the Postal Service. “Due to the repetitive and controlled work environment involved with working the mail, it’s hard for postal employees to realize their full potential at work,” Wakefield adds. “Hopefully PostalMag.com can help unleash some of that potential.”

By Gary Dorsey, Baltimore Sun
Published November 1, 2001
“By now the image of postal workers as working-class heroes hangs enshrined in the gallery of noble yeomen alongside New York firefighters and World Trade Center rescue workers. As silent paladins – brave soldiers – Postal Service employees have been characterized as the latest troops on the front line in a homeland war against terrorism. But in fact, since anthrax threats turned grim, the silence among employees of the U.S. Postal Service has stemmed less from quiet courage than from…”

Neither Rain Nor Hail Nor E-Mail

By Kendra Mayfield, Wired News
Published June 7, 2001
“Much of the content of many e-mails, from jokes to chain letters, would not have been sent via the U.S. Mail, said Tom Wakefield, president of PostalWorkersOnline.com. Many of these short communications would instead be conducted by telephone.”

Is FBI Following The Wrong Trail?

By John Berlau, Insight Magazine
Published January 7th, 2002
“The Unabomber never tried to portray his motive as something else to ‘throw off’ authorities,” notes Tom Wakefield, an expert on crimes through the mail, in an analysis for PostalWorkersOnline.com.”